NKY FAME and some Northern Kentucky businesses stepped up to help sponsor a NASCAR XFINITY driver at Kentucky Speedway ALSCO 300 Saturday who has become a spokesman for the FAME program.

Garrett Smithley, driver of the No. 0 (#NUMBERNUTHIN) for JD Motorsports had decals from the region prominently displayed on his Chevy Camaro in Saturday’s race. 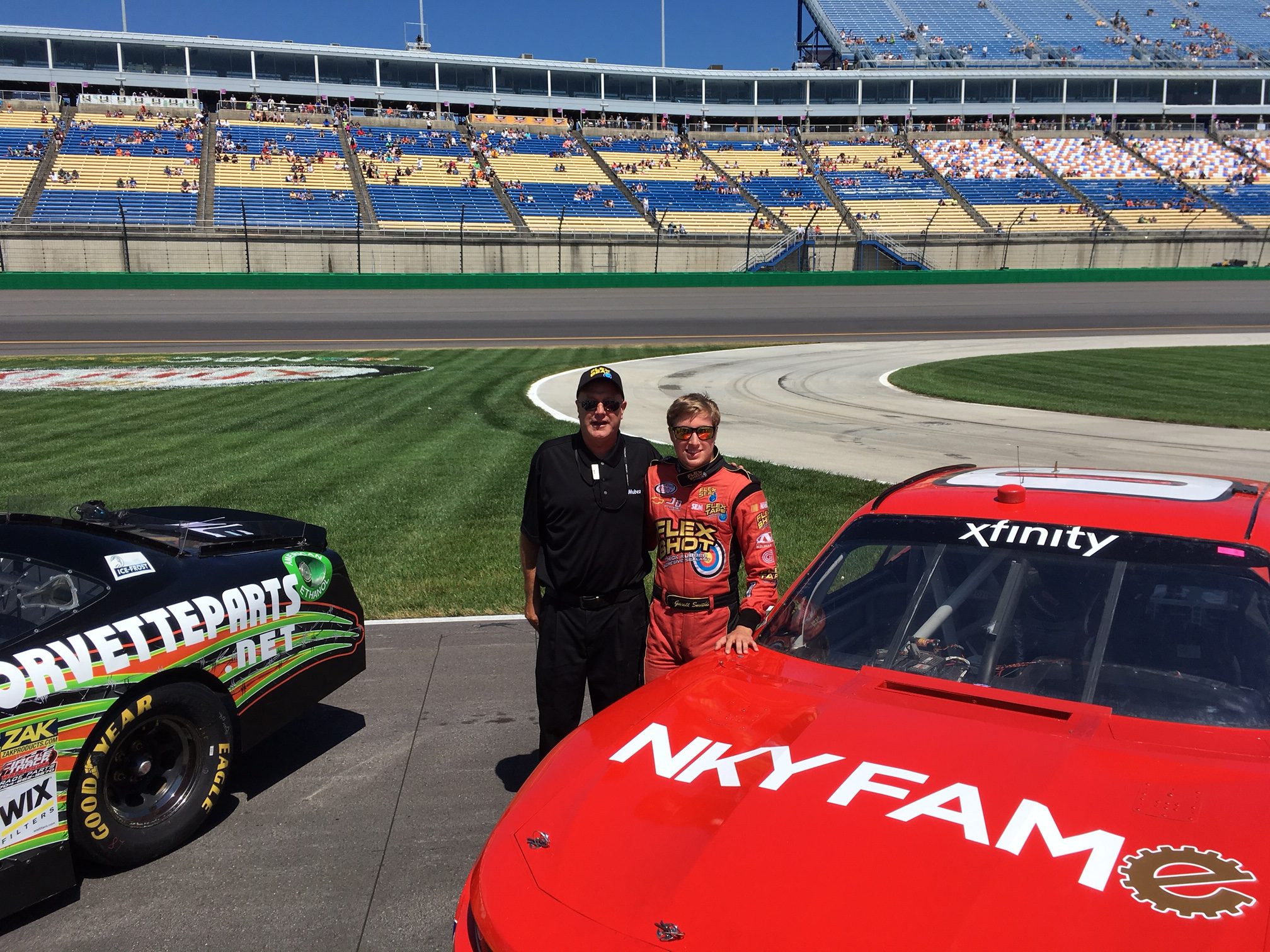 The hood featured the familiar NKYFAME logo and the rear panel had a large Mark Spaulding Construction decal as well as a smaller label from Smokin’ This and That BBQ.

“We were hoping that in some shape or form FAME would be on and they stepped up to the plate,” Smithley said. “Then Mark Spaulding Construction, and the barbecue guy came on, so that really helped. That just kind of carries the team and make everything a little easier happy.”

The partnership between Smithley and FAME, which stand for the Federation for Advanced Manufacturing Education, has been growing for a while.

Smithley said he knew right away he wanted to use his position in NASCAR to raise the profile of the FAME programs.

“My cousin came through the program and now he works at Toyota in Georgetown,” Smithley said. “He spoke at the conference for a little bit and that was kind of cool, because I got to bounce some ideas off of him, somebody that has been through it.”

The advanced manufacturing industry is actively recruiting future employees through apprenticeships, co-ops and other incentive programs, to fill its needs now and in the future. Growth in the industry, coupled with the imminent retirement of a generation of baby-boomers, has resulted in a shortage of qualified workers. Hundreds of jobs with a starting salary of around $50,000 per year, go unfilled.

Garrett Smithley with sponsors Mark Spaulding of Mark Spaulding Construction (left) and Guy Cummins of Smokin’ This and That BBQ, both located in Florence, prior to Saturday’s race

Mubea, a German-owned company that manufactures automotive components, such as springs, hose clamps and stabilizer bars, began operating in Kentucky in 1982. It now spends more than $2.5 million annually on its apprenticeship program.

Drew Farris, apprenticeship manager for Mubea and president of NKY FAME, said for Smithley, the affiliation is more than just a sponsorship agreement.

“He believes strongly in the FAME concept and hopefully he will bring the FAME organization with him as he moves forward in his career,” Farris said.

Smithley, 25, says because he is almost the same age as potential apprentices, and is in a high-profile position, he can deliver an effective message.

“This is kind of geared toward my generation,” Smithley said. “What I want to be able to do is say, ‘Hey look, this is a really awesome program – it gives you an opportunity to go out and be successful without a lot of debt, compared to a traditional university. You can make money while you are training and start out making a great salary and I think that’s really big.’”

Smithley has had an up-and-down start to the XFINITY season.

The team ran eighth at Daytona, but a loose wheel at Atlanta spoiled what could have been a top-20 finish, then it changed crew chiefs.

“That’s been a little bit of an adjustment for me,” Smithley said. “With this being only my second season, I’ve only worked with one or two crew chiefs. I think we are to the point where we are building in the last several weeks and we brought good cars to the track and improved them.”

For a team without a big budget, that’s the goal.

“We had some good runs that were hampered by issues – we had motor issues at Pocono, we had a pit issue at Michigan,” Smithley said. “Both of those races we were probably going to finish top 20, top 15. In Iowa a few weeks ago, we finished tenth, which was probably the highlight of our season so far and it was really cool to do that at a non-restrictor-plate race.”

Smithley started 32nd and finished running in 26th position at the Alsco 300.

For the sponsors, the national television exposure of a NASCAR XFINITY race alone makes it worth the investment, but helping a driver further his career and getting the word out about the FAME program is also important. 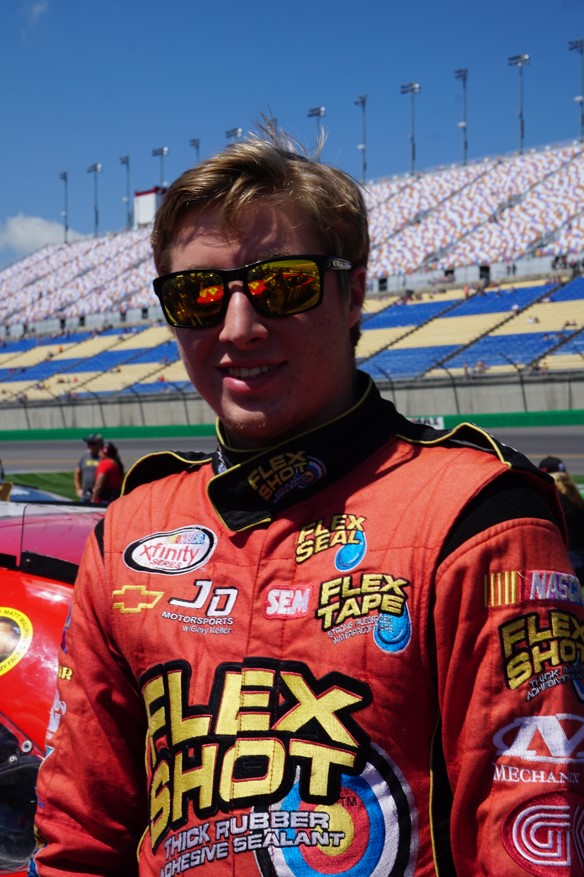 Smithley getting ready to race

While Spaulding stepped up to the plate, Guy Cummins of Smokin’ This and That BBQ in Florence, stepped up with the plates, providing catering for the team throughout the weekend.

Another partner’s name will not appear anywhere on the “NumberNuthin” car. Farris said an anonymous donor stepped up at the last minute with what he called a “significant contribution.”

“Mark Spaulding Construction has been a very good partner with us and Smokin’ This ‘N That BBQ came on board as a partner to help with catering,” Farris said. “Kentucky Speedway has been a great partner, too – they are on the board of KY FAME, so we have great partners throughout Northern Kentucky.”

Smithley has never lived in Kentucky, but spent a lot of time in the region as a youth and said he really values the local partners.

“I’ve got a lot of family in Lexington, so it’s always special to come back here,” Smithley said. “We talk about the local sponsors, but it means even more at a place where you feel at home.”

Smithley admits that after years of keeping focused on just what’s directly in front of him, he has begun to look at some bigger goals.

“I started looking down the list a couple of years ago at all the Monster Energy Cup drivers and I realized there were a lot of guys of a similar age that may be ready to move on,” he said. “I’ve been trying to make plans and nothing is confirmed, but I would like to make a couple of Cup starts this year. Maybe if I do get an opportunity, and we’re working on some things for next year, maybe full-time XFINITY and part-time Cup.”

He sees an opportunity for FAME to be a part of that move up as well.

When he spoke at the convention in May he spent some time with Chris Melvin of the Toyota AMT program in Indiana, which is affiliated with FAME USA.

“They are very much on the upswing and I can announce now that they are going to be on the car for Indianapolis,” Smithley said. “Chris has been an awesome proponent of the racing part. I’m hoping that, starting in Kentucky and then moving over to Indiana, that maybe it will open the eyes of some of the other FAME states, Texas, Alabama, Missouri and Tennessee.”

While Smithley knows FAME alone can’t sponsor a car for the season, he sees them as potentially a big piece of the puzzle moving forward.

“I’m hoping that one day soon, we can find that big sponsor to partner, then ride the coattails and continue to promote the FAME program,” he said.

Article by Mark Hansel for the Northern Kentucky Tribune